When my identical twin boys were born, we brought them home to sleep in cute little bassinets. Our three bedroom home had no room for cribs and they were happy and content.

{I still can’t believe they both fit in one!} 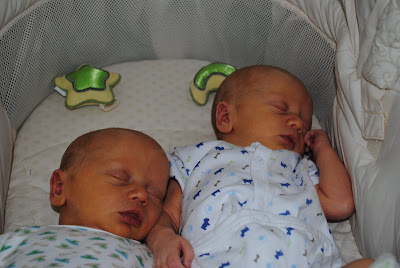 After a few months we moved them each into their own playpen because they had more room and they weren’t able to keep the other awake with their movements. (Sounds never have been a problem for each other.)
We moved to a new home when the boys were 5 months and although they were growing rapidly we kept them in their playpens because we figured time would go fast and there was no point in purchasing cribs when we already have toddler beds waiting for them. If they were anything like our other three children, they would be transferring to those at a pretty young age.
The problem with this plan is that I cannot imagine two toddlers having free reign of their room at night. It is crucial that these little boys stay restrained for as long as possible.
Our plan also became flawed when the boys began thrashing their heavy strong bodies against the playpen to break both of them! They would also pull at the playpen bottoms and throw them out, leaving their bodies to find comfort against the hard, metal railings. This began becoming a common occurance and I was heading into their rooms several times a night to fix their beds. Then they stopped napping………something needed to happen!
Three months ago, when the boys were 16 months, we finally decided to purchase two new cribs. They love them. They are sleeping better and my only regret is that we didn’t do it sooner!
I quiver at the thought of moving these two active boys into toddler beds.
What age were your twins when you transferred them?
Any tips to make the transfer easier?
{Ashley is a homeschooling Mom to 5 kids ages 6 and under.  Her days are busy, chaotic and loads of fun!}
Share this...

16 thoughts on “The Great Bed Transfer”