M and J were born 7 weeks premature. When we found out we were having twins, my ob/gyn told us, right off the bat, that we could expect them to arrive early. She offered to help us find a new doctor who had privileges at a hospital with a neonatal intensive care unit. My husband and I agreed that we wanted her to care for us during the pregnancy, even if she wouldn’t be the one to perform the delivery if it was early.

We didn’t know the first thing about prematurity. When the doctor said, “privileges at a hospital with a NICU,” we were so naïve that we just looked at her blankly. She had to spell out that a NICU was a neonatal intensive care unit and we should prepare ourselves for an extended hospital stay. This pregnancy was high risk, all the more so because I was 5’0 and weighed 112 lbs. There wasn’t exactly a lot of room for expansion, at least up and down. The prospect of gaining the ideal 60 lbs over 9 months seemed challenging, and turned out not to be a goal I could accomplish.

Still, the pregnancy was so relatively easy on me – not so my husband; my temper was terrible! – that I was sure I could carry the girls to at least 35 weeks. I had no morning sickness, and I was floating on air during the second trimester. Thirty-five weeks was our goal, because twins tend to gestate about two weeks faster than singletons, and therefore 35 weeks for them was as good as 37 weeks for a singleton.

We went through the motions to prepare for preemies. An aunt got the girls preemie-sized outfits at the baby shower the family threw for us, even though I couldn’t attend. (My doctor highly recommended that I not fly to Oregon.) We took our Lamaze class with a group of couples 2 to 3 months farther along in their pregnancies than I was. Despite these steps, we hadn’t prepared emotionally, and I was still deeply attached to the idea of a natural birth. I had made a list for my hospital bag, but hadn’t actually packed, when my water broke at 33 weeks, 1 day.

The actual birth was a haze. J weighed 3 lbs 6 oz, M 3 lbs 9 oz. J had a patent ductus arteriosus (PDA), or a hole in her heart. It’s a common condition in infants, and resolved itself within a couple of months. Neither M nor J needed any help breathing. They didn’t need oxygen treatments. Unlike some of the other preemies in the NICU, they didn’t have any issues with apnea of prematurity, which is essentially what happens when a preemie forgets to breathe.

They were really small, though. They couldn’t regulate their own body temperatures because their baby fat hadn’t come in yet. They had to stay in their warmed isolettes, although they were strong enough that we were allowed to hold them for several hours each day, and keep them warm with our own body heat. When they finally downed 31 mLs (1 oz) of formula and breastmilk in one shot, I cried for joy, because that was one of the criteria the NICU had set up for release from the hospital. Days earlier, my husband had fought for my right to breastfeed, fighting formula and the feeding tube while I was being moved out of the operating room, until a doctor kindly, but firmly, told him that our babies were really, really sick, and all our plans were going to have to wait.

We had the healthiest preemies in the NICU, but still, they were tiny. 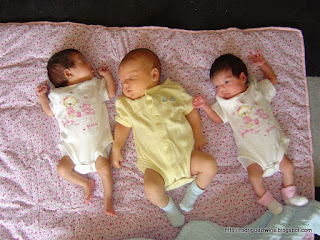 In the picture above, J and M (in the matching white onesies) are a day shy of a month old. D, a dear friend’s son, is two weeks old. That’s half their age. He was born on his due date at 40 weeks gestation, compared to M and J’s 33 weeks. His legs are twice the size of theirs. His arms are twice the size of theirs. Each of his hands could almost contain one of theirs. M or J would disappear inside the newborn-sized onesie D is wearing. D wasn’t a particularly large baby. What you can’t see is how baggy their preemie-sized onesies are on them.

Remember, M and J are twice as old as he is, if you count from their birth age.

I actually learned not to measure their age from their birthday. When I did use their birth age during their first year, I felt like I had to keep explaining why the girls were so small, or why they weren’t holding up their heads better at their age. Not only that, but my poor friend kept having to defend little D when we were together in public. “He’s not fat! He’s not huge! The twins are just really really tiny!”

Once we reached their due date, the day they would have been born full-term, I began to use their corrected age, that is, how old they would have been if they hadn’t spent the last two months of the gestational period outside the womb. It was so much simpler to tell strangers at the grocery store that the girls were a month old, rather than, “They’re three months old, but they were born two months early, and please don’t look at me like that because I’ve never done a drug in my life and maybe if I’d been on bed rest the pregnancy would have lasted longer, but I did the best I could, and I’m really trying to be a good mother.”

Yes, I was extremely touchy about the fact that the girls were born early. I felt like my first act of motherhood had been to betray them by evicting them from my body half-cooked.

Our pediatrician was fantastic. The entire practice has a lot of experience with preemies. In fact, all the twins I knew in our old town went to one of two pediatricians. (Not all twins are premature. My husband’s now 16-year-old triplet cousins were born full term. However, the rate of prematurity is high for twins, over 50 percent.) The doctor focused always on how M and J were doing compared to where they started, rather than looking at averages. When he tracked their growth on the growth chart, he used their corrected age. When it came to timing immunizations and the introduction of solid foods, we followed the guidelines of the American Academy of Pediatrics, again using their corrected age.

M and J are healthy. They only long-term effect of prematurity appears to be the state of their teeth, although we faced some challenges in the early years with their lung development. We’re the lucky ones, though. Others aren’t as fortunate.

Here’s what I would tell my pregnant self if I could:

Don’t be irritated with he doctor when she tells you that you need to quit working. Listen to her when she says that you’re having too many Braxton Hicks contractions, too early. Working part time and telecommuting was a great alternative to working full-time, but you could have afforded to stare at the ceiling for a few weeks to give those precious girls a better start. It might have made a difference. It might not have. You’ll never know.

I will never know what I could have done differently to give J and M another day or two in utero, but I will always wonder.

Sadia’s daughters, J and M, are now thriving in first grade. They’re a head and half shorter than their classmates, thanks to inheriting Sadia’s (lack of) height. A previous version of this post was published on Sadia’ personal blog, Double the Fun, on honour of the Bloggers Unite Prematurity Awareness event 2009 .

6 thoughts on “Prematurity Is Never Easy”