Hello, dear HDYDI readers!  We have a special treat for you today.  A guest post from the super-awesome twin mom and blogger, Sadia, of Double the Fun.  Sadia has given us a very thoughtful review of One and the Same, by Abigail Pogrebin.  Even better still, the author is letting us give away a signed copy of the book!  Don’t forget to leave a comment that includes a valid email address in the form (email is never made public, never passed out or sold to anyone) so that we can contact you if you win. One entry per person, please.  Comments will close this Friday, July 9, at 5PM EDT and a winner will be chosen at random.

The other day my husband said, “You’ve been reading a lot of parenting books. Don’t you think you’re a good mom?”

“It’s not that,” I told him. “I think I’m a pretty good mother to Jessica and Melody. I read these books because I want to stay ten steps ahead of them. I want to be challenged by other people’s ideas. They’ll either help me recommit to the parenting philosophies and practices I already subscribe to, or they’ll make me rethink how I parent.”

Abigail Pogrebin’s One and the Same is a book that has challenged me as a mother of twins, causing me to change my parenting in some ways and dig in my heels in others. I hadn’t yet heard of the book when Abby asked me to review it several months ago, but I’m sure I would have bought and devoured it by now even if she hadn’t.

Abby is a journalist and an identical twin herself. She set out to write about twinship, and explores the myriad experiences of twinhood in depth. One and the Same balances intimate stories of individual sets of twins with patterns identified by researchers who study twins. Much of the writing is intensely personal, but it speaks to the mystery, joy and challenges of the universal twin experience.

I was particularly intrigued by the way that twinship can impact marriage. Abby describes it beautifully. She says that being Robin’s twin has given her, “a congenital clarity of what it is to be wholly close to another human being.” Some of the twins Abby interviewed drew parallels between the twin relationship and marriage. I hope that the compromise skills that my daughters are learning to survive life with one another serve them well should they choose to marry. On the flip-side, Abby points out that during her time at the Twinsburg convention, she notices a high number of twins, mostly male, who have never been married. Might women be put off by the intimacy and affection that twin brothers share?

I wept my way through the chapter on twin death. Abby interviewed a man who lost his twin in the Twin Towers on 9/11. She also found a number of people who thought they were singletons and developed an inexplicable fascination with twins, only to discover that they were the sole survivors of twin pregnancies. I look at my daughters and can’t imagine how one could navigate her life without the other. 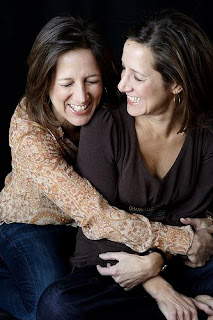 The only part of the book that I didn’t like was, ironically enough, the one that dealt with parenting twins. Whereas Abby spent the rest of the book showing us how different and unique each experience of twinship is, this chapter spoke in generalities, many of which failed to resonate with my experience as a mother of twins. Like Abby, I take exception to the experts’ assertion that every mother of multiples has a favourite child. From time to time, each of my kids drives me nuts, and from time to time, one needs more of my attention. The love, though, is equally infinite. The takeaway of the chapter was that the challenges of raising twins, especially in the early years, outweigh the joys. I disagree. Yes, it’s often hard, but good parenting is hard, no matter how many kids you have.

The parenting lesson I took away from One and the Same is that twinship does not have to compromise individuality. Twins don’t have to choose between their twin identity and their personal identity. A singleton myself, I recently realized that I had assumed that emphasizing my daughters’ twinship would cripple them as they developed their individual identities and interests. Abbie shows us that does not have to be the case. Being a twin is part of what make my daughters, Jessica and Melody, unique. However, One and the Same doesn’t shy away from the reality that there are pairs of twins out there for whom their twinship defines them. For instance, it quotes Debbie Ganz, who, with her sister Lisa used to run a restaurant in which all the waiters were pairs of identical twins. “A guy once said to me, ‘I don’t want to know about your twin thing: what are you like?’ I froze and started to feel upset. Because I couldn’t answer him.”

One and the Same is the most astute book I’ve come across that discusses the twin experience. I would have enjoyed it equally, although differently, if I’d never met a twin in my life.

Q and A with Abigail Pogrebin

Abigail Pogrebin was kind enough to answer a few questions that occurred to me while I was reading One and the Same. This is what she had to say.

Sadia: You share intimate and sometimes heart-breaking details about how you feel about your changing relationship with Robin. Has she read your book? What was her reaction? What about your parents’?

Abby: I didn’t feel I could write this book without Robin’s blessing (and her editing – she’s a formidable journalist) and so I showed her a draft as soon as I finished it. I admit that it wasn’t an easy read for her at times, and she even challenged me in some places, which I think made me revisit certain sections and rethink them. But the truth is that Robin was incredibly supportive of the book, both privately and publicly. I was grateful that she agreed to go on the Today Show with me and that she worked so hard to prepare for a special event we did together last fall in New York in which she interviewed me about the book before an audience of 200-plus; she made it a wonderful evening. Most importantly, this book made us closer in ways I can’t quite explain. It’s like the truth finally was on the table and we could get on with this phase of our relationship.

As for my parents, they were also tremendous boosters, but feel somewhat baffled by why twinship can end up being complicated when it felt so simple to them during our childhoods.

Sadia: You’ve described twin romance beautifully, and have been able to convey how normal and natural that intense relationship is, even if much of society is unable to comprehend it and sometimes views it as pathological. My husband and I see that romance growing in our own daughters. Do you have any advice to parents like us on how to prepare our kids for resistance they may get from others regarding their twin relationship?

Abby: My only advice is to talk about it ahead of time, to discuss the fact that their twin romance can be intimidating, excluding, or off-putting to other people and sometimes they may want to keep their intimacy to themselves, if that makes sense.

Abby: Yes, if I had twins, I would object to people calling them “the twins,” because I do think it has a cumulative negative effect over time; it  underlines their two-ness as opposed to their singularity. It may seem unimportant, especially when the twins are young, but I know I hated the term growing up. It felt lazy to me when someone called us that; is it really so taxing for them to say our names when they’re talking about us?

Sadia: If you could give parents three pieces of advice on nurturing both their twin’s closeness and their independence, what would they be?

Sadia: We have a set of triplets in our extended family. I can’t help wondering how having more than one same-age sibling would affect relationships between multiples. Do you know any higher order multiples? How would you compare their relationships to those of the twins you interviewed?

Abby: I don’t know any triplets myself, but I did interview one in my book and her story is worth reading – it appears in the chapter on competition. It amazed me that a triplet can feel like the third wheel when the other two triplets are twins.

Sadia: You quote Joan Friedman’s distinction between being known and being noticed, as it pertains to twinship. Could you please explain this distinction to HDYDI’s readers? You acknowledge that her distinction resonated with your sister’s experience of being a twin. Do you ever feel less “known” because you were a twin

Abby: As twins, you’re often “noticed” because you stand out – especially if you’re identical. It’s an oddity, a novelty, people notice you, look at you longer, compare you. People are curious, they confer all sorts of ideas about what your bond and relationship must be like. But most of the time, they don’t really get to know you; even the people who see you regularly –relatives, friends, teachers. They don’t necessarily make the effort to get to know who you really separately (and yes, it may take more effort to ascertain those differences.) They seem content with the superficiality of your twinship. So they notice you, yes, but they don’t know you.

* Disclaimer – Although Ms Pogrebin did contact Sadia to ask her to review the book, Sadia purchased her own copy. This review was not influenced in any way by the author.

20 thoughts on “Guest Post: Review and Giveaway – One and the Same”