Ella and Zoë were preemies. They were born a little over 10 weeks early and spent 47 and 57 days in the NICU.

They had many issues to overcome, though not nearly as many as they probably should have had. They were fighters from the get-go, like all preemies are. They had to work hard to be able to do things a full-term baby is easily able to do on its own. They needed a lot of help and were given that help by the most amazing NICU nurses and doctors. They are alive today due to medical advances which were brought about by the research funded by the March of Dimes.

They are now 7 1/2 years old, and you would never be able to tell they were premature, by either looking at them or talking with them. I think Ella and Zoë have quite the story to share, and this week I am joining in with hundreds of other parents and bloggers in the Fight for Preemies to help raise awareness and fight… because babies shouldn’t have to.

Ella and Zoë’s story started many years ago when Tom and I first began our journey of trying to become parents.

Then we found out I was pregnant again. We got the positive and started celebrating. Cautiously.

I started bleeding at 6 weeks (at 11pm) and we spent that long night together and braced ourselves for more bad news. We were beside ourselves when we saw not one, but TWO hearts beating strongly on the ultrasound screen. We were going to have TWINS!!

Then at almost 12 weeks there was more bleeding, and that’s when we found out Baby A’s placenta (Ella’s) was starting to detach.

That was the beginning of my 8 weeks of bed rest.

At 24 weeks preterm labor started and so did my time in the hospital.

A little over 10 weeks early, due to a really bad case of preeclampsia that turned into the beginning stages of HELLP syndrome — (I gained 19 pounds over the weekend), my doctor decided it was time for us to meet the babies. We were super excited but very nervous that it was too early. On Wednesday, April 19th (29 weeks 6 days) at 6:49 pm, Ella Marie was born. We named her after Tom’s mom, Della Marie, and her name means ‘Light’. She weighed 2 pounds 14 ounces and was 16 inches long. She was perfect.

At 6:51 pm, Zoë Dianne was born. We named her after my mom, Dianne, and her name means ‘Life’. She weighed 3 pounds 5 ounces and was also 16 inches long. She was also perfect.

Even though we were nervous, the c-section went well and was so amazing. Ella, the tiny peanut that she was, came out crying pretty strongly for such a little thing.  Zoë had swallowed more amniotic fluid so her first cries sounded more like a kitten rather than a baby, but to Tom and me hearing both girls make noises (their lungs were working!) was the best sound we’ll probably ever hear in our lifetime.

After the initial assessment by their own team of neonatal doctors and nurses both girls appeared to be overall very healthy and only required room air oxygen to help with their breathing. Hearing that news was such a relief! (Most preemie problems are respiratory related.) Even though they were only almost 30 week gestational babies they were doing so well!

Before they were taken out of the operating room the nurses brought Ella over to me first and then Zoë. Ella had been crying since her grand entrance but stopped when I started talking to her, my heart melted. Because Zoë had swallowed more amniotic fluid her team was in more of a hurry to get her to the Neonatal Intensive Care Unit (NICU), so instead of talking to her I gave her a little kiss on her forehead. It was probably a reflex, but that little sweetie leaned forward and kissed my nose! My heart melted again.

During the first few days of Ella and Zoë’s lives they each had a lot of different things done to them, including IVs (which they did not like, and often pulled right out), feeding tubes, and being attached to monitors for pulse, oxygen content, respiratory and blood pressure. Both had brain ultrasounds done a couple of times, and we were relieved to hear they each had “normal brains” (meaning no bleeding or swelling). The girls did need to pass a few tests before they could come home. They needed to breathe on their own and Ella needed to stop having her apnea spells; they needed to regulate their own body temperatures; and they needed to learn how to suck, swallow and breath, all at the same time.

On the fifth day of Ella and Zoë’s life I was finally well enough to go to the NICU.

And so began our life at our Home Away from Home — the NICU.

It was a ‘one step forward two steps backwards’ type of dance those first few weeks but we were lucky.  Ella and Zoë did really well, especially considering all of the ‘what could have beens’. And we had THE BEST PRIMARY NURSES ever!!

We will always be grateful for the care that Molly, 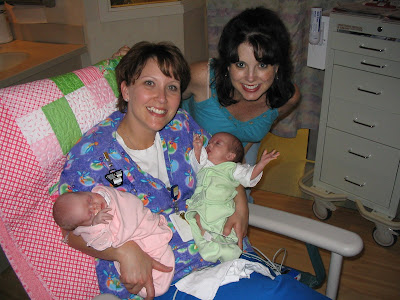 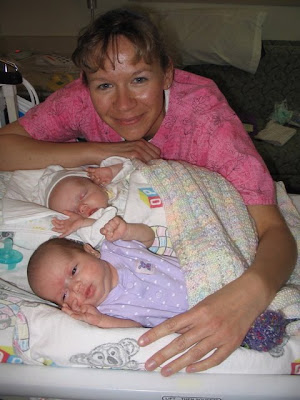 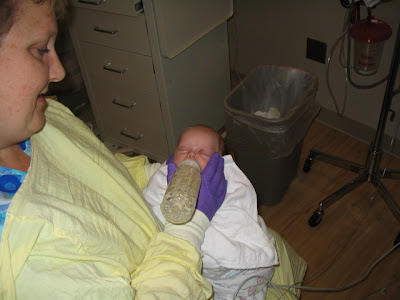 and Becca gave our daughters. 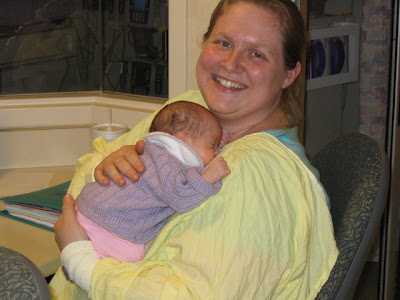 Leaving them each night would have been much more difficult it weren’t for those four nurses, as well as all of the other amazing staff that helped take care of our girls.

After 47 days we brought Zoë home!!

It was somewhat bittersweet though as Ella needed to stay in the hospital a bit longer, but the only way we were able to leave Ella was because Nurse Molly was there to hold her for us. Again,we’ll always be so grateful.

So for 10 days we learned how to parent a single baby at home while also spending time in the NICU helping Ella recuperate from her infection. On day 57 we brought Ella home and FINALLY, all four of us were under one roof!!

We were ready to start the next exciting chapter in our lives . . . A life that included a heart monitor for Ella, a pump, bottles, feed schedule every 3 hours (because both girls couldn’t swallow on their own and needed their milk thickened) that took 45 minutes to accomplish if everything went well . . . and lots of playing, smiles, cuddles and love. It took some time to get into a routine, and we didn’t get a lot of sleep those first few months, but eventually our days were more often less chaotic than chaotic ☺. 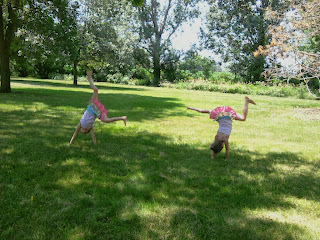 They love building and creating… 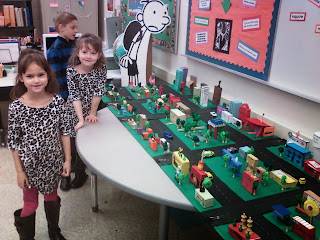 reading anything they they can get their hands on… 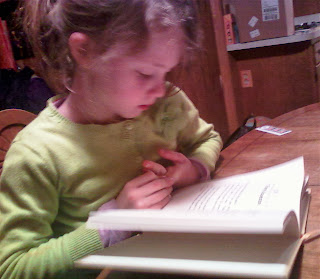 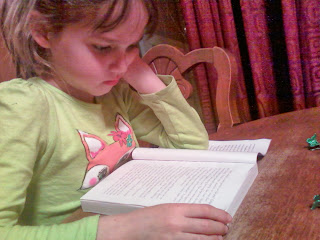 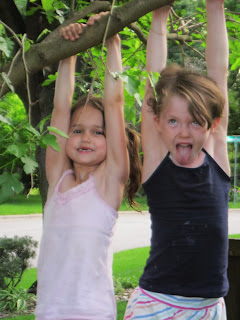 and with their Grama Dianne… 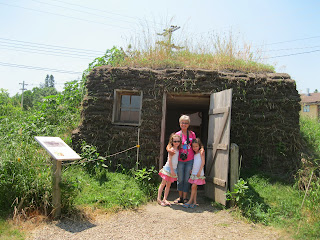 they love animals and bugs… 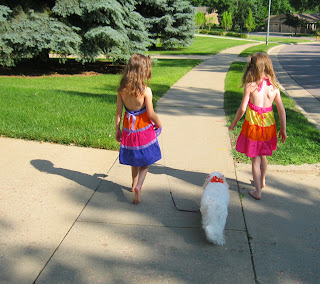 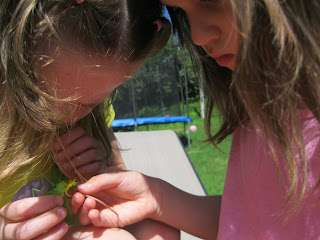 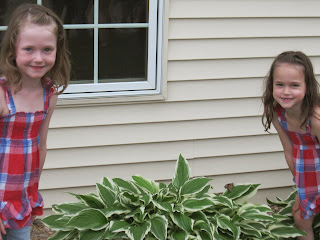 they love spending time in the lake… 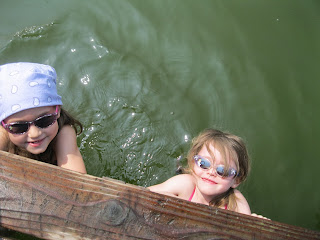 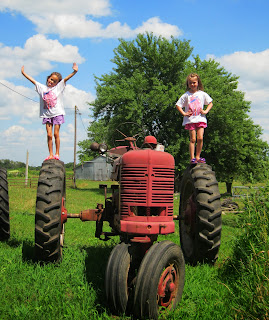 and at our neighborhood zoo… 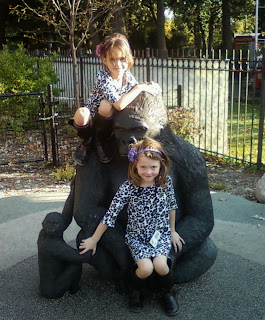 Thank you, March of Dimes. We have so much to be thankful for. 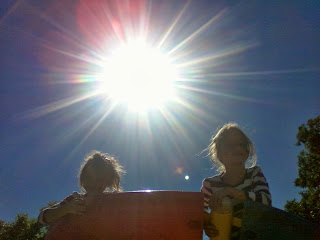 MoM to 7 1/2-year old fraternal twin girls, kindergarten teacher Jeremi blogs at Ella and Zoe.  Each of her picture-filled posts radiates the joy she gleans from her two most beautiful gifts.

One thought on “Thank You, March of Dimes… Ella and Zoë’s Story”